Supplier of logistics services GHEYS and terminal operator BCTN will open a new container terminal in Beringen/Tessenderlo at the start of 2018. The terminal will be built on land acquired from Dow Chemicals in 2013 and is connected to the Albert Canal via the Kanaalkom. BCTN has been awarded a long-term right of use over an area of 20,000 m². This is BCTN's eighth terminal and its third in Belgium. It is GHEYS' second terminal following the opening of the inland container terminal in Mol in 2007.

The new terminal will allow GHEYS and BCTN to collaborate more efficiently and sustainably by focusing heavily on inland shipping. BCTN Meerhout currently handles about 8,500 containers a year for GHEYS. The new terminal creates a direct connection with the ports of Antwerp, Zeebrugge and Rotterdam thanks to the Albert Canal. GHEYS' logistics site, more than 50 hectares in size, is located on the Ravenshout industrial site along the E313 and offers a direct connection by barge and train.

“Sustainability is key in both GHEYS and BCTN's corporate vision”, says Ronny Joos, CEO of GHEYS. “For instance, GHEYS has used inland shipping for many years already and is continuously investing in making its fleet more sustainable. And we are currently constructing three wind turbines in Beringen to produce our own sustainable energy.”

“In May 2017, BCTN was the only inland operator to be awarded the second Lean & Green Star, the main recognition for sustainable entrepreneurship in the logistics sector. BCTN tries to carry out its services as sustainably as possible, among others by using low-energy equipment. GHEYS and BCTN's terminals in Geel and Beringen will result in more than 50,000 – and in the long term 80,000 - less lorries on the road every year”, clarifies Joop Mijland, CEO of BCTN.

Primarily, the terminal will support the further growth of GHEYS' container activities. By 2020, a volume in excess of 20,000 containers a year is expected, more than a doubling of the current volume. In the long term, the terminal, with its capacity of approx. 50,000 containers, will also handle volumes of third parties in addition to GHEYS' activity. Operator BCTN will support this expansion by forming a network between the terminal and its seven other terminals.

The new terminal will be equipped with an electric gantry crane and will be operational five days a week from 7 a.m. to 7 p.m. The terminal will work with push barges along the waterfront. Two push barges will be in Beringen every day and one in the Port of Antwerp.

Gheys is a family business and has been active in the field of transport for more than 100 years. Since 1992, it has also provided logistics services to its customers. Over the last 30 years the company has specialised in the transport, storage and handling of polymers for the petrochemical sector.

BCTN has been active with a container terminal in Nijmegen since 1987 and this initiative has grown in the meantime. Currently, a large part of the containers for the domestic market is already transported through one of the seven BCTN inland terminals and increasingly more companies are understanding the advantages of this sustainable method of transport.

In Europe, Lean & Green is the leading programme in the field of sustainable logistics. Lean & Green stimulates organisations to grow towards a higher sustainability level together by adopting measures that not only result in cost cuts, but at the same time reduce the environmental impact and lead to a more efficient organisation of the operating/logistics processes. Lean & Green's eventual objective is zero-emission, symbolised by the 5th Lean & Green Star. 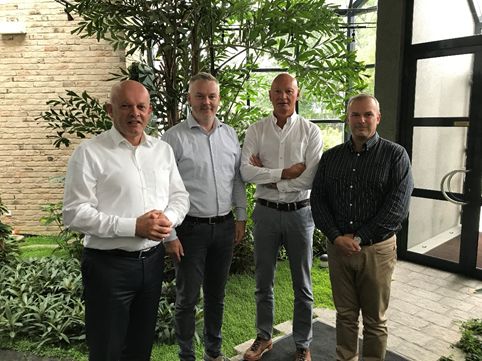